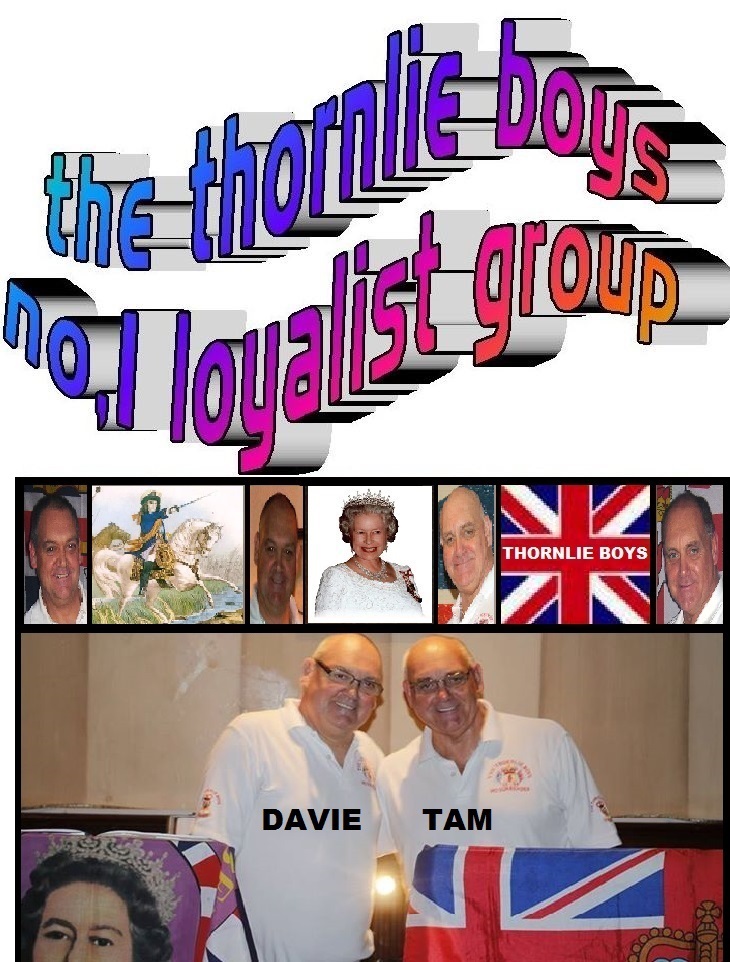 If you are a true Blue Glasgow Rangers Fan,  a Protestant a Loyalist or anything to do with The Protestant Religion then it's almost certain that you have heard of

Most probably at your supporters ' club annual Dance, player of the year award etc. They compromise of Thomas and David two lads steeped in the Loyalist Protestant tradition from birth and both playing members of

Sit back and relax and step back in time and share some of the early events and venues with arguably one of the best known Loyalist groups in the world today, YES,  you guessed it

Two brothers Tam and Davie, who were brought up like most of us living in a Glasgow housing scheme in Arden near Thornliebank.

We will pick up our story around 1966 when Tam joined The Thornliebank Accordion Band. Two/three years later his brother Davie joined him and became a member and to this present day both guys are still very much staunch band members. As the years rolled by Davie was voted in as the leading drummer and Tam became The Musical Director ( teacher ) from that moment on the band went from strength to strength. During this time Tam and Davie were asked to play at local band functions and also their Lodge, Thornliebank Guiding Star lodge 164, where they also manged to play at Harmony evenings after meetings, eventually Tam purchased an electric accordion and Davie his first ever drumkit.

Bookings now began to flood in ranging from Weddings, Engagements Parties to Loyalist evenings which were our spcialalities the two brothers never looked back. After this the Thornliebank Band recorded their first Album entitled " The Sash " the front cover featured an early photograph of the future Thornlie Boys.

The Album was a great success and it was not long before a gentleman named Sammy Dennistoun alias Billy King, asked the band to record another Album, this was known as " The Rangers Story ." Featured in this Album were songs like Sandy Sandy, Belfast Town, The Rangers Story, Rangers over here, Blue Sea of Ibrox, No Pope of Rome, Fields of Ulster. Here Lies a Soldier and many more hits which have now been recorded by many other Loyalists Groups. These early recordings were backed by The Thornlie Boys, but, then we were known as " The Derry Boys, The Ibrox Swingers etc. because of certain activities which were going on at the time, the first recordings of " No Pope of Rome " " Build my Gallows "  "Here Lies a Soldier "  " The Fields of Ulster "  "  The Blue Sea of Ibrox " etc. were recorded by Tam and Davie many years ago. Since then they have been reproduced by other Loyalist Groups, when all the new technology came along they decided not to upgrade their equipment and eventually called it a day.

They were still staunch members of  The Thornliebank Accordion Band and paraded on the streets of Glasgow, Belfast and anywhere on the Queens highway when and where ever possible. Around 10 years passed when Tam and Davie decided to make a comeback after listening to tunes by other Loyalist Bands. Tam purchased a cheap keyboard and began to learn how to play it. As he could play the Accordion, write read and teach music the keyboard was easy enough to master. Davie did not need a drumkit as it was all built into the keyboard so he decided to try his vocal chords. Around a year later, through a good friend, Tam and Davie were asked to do their first function a night in " Angels Bar " a name for the group had to be thought of  hence, The Thornlie Boys were born, although the booking was not a great success for the lads word got around of another Loyalist Group on the circuit and other engagements started to pour in.

The Louden Tavern's in Ibrox, Dalmellington and Dennistoun, The Rangers Club, Locharbriggs in Dumfries, Inverness, Elgin, Glasgow, London, Greenock, Kirkintilloch, Dundee and before it closed down The Mermaid Bar in Saltcoats were only a few of the early venues where they were asked to play.

Since then the bookings keep coming in some local some further a field like down south, Blackpool, Leeds, Stoke-on-Trent, Ipswich etc. up to the North of Scotland, although we played in Inverness and Elgin, now Lossiemouth, Fort William and Stornoway etc. must be added, also North and South Ayrshire infact all over Ayrshire etc. The Falkirk Area, Laurieston, Reddance, Airth, Shieldhill, Camelon, Caronshore etc. in Lanarkshire  Larkhall, Coalburn, Motherwell, Hamilton Blantyre, Burnbank etc. Not to forget our friends across the water in Northern Ireland,  Knochlouchgrim, Ballymoney, Shankill Rangers Supporters Club, Albertbridge Orange Halls, Portadown etc. and many more, we also played in sunny Spain, Benidorm, in the Ibrox Bar for a whole week and might I add what a week that was before out return flights back into Glasgow. I have probably missed some great venues, but, if  I have I do apologise it was unintentional.

The Thornlie Boys have also released a number of   Cd.s  which features music and lyrics written by

Tam and Davie of The Thornlie Boys

Tam and Davie write, " We Tam and Davie of  The Thornlie Boys felt it necessary to make it clear that the songs we have written with regards to Music and Lyrics are all solely done by ourselves, some Loyalist Karaoke Singers  and Loyalists Groups have tried to claim our Music as their own and claim the credit for all our hard work. Some of the titles of songs we have written appear on our site on other pages please take the time to go through our website we will Guarantee you a good time of reading and listening to some of our popular recordings.

Tam and Davie also write, " We The Thornlie Boys know that we are not every ones cup of tea, but, then again, neither were The Beatles or The Rolling Stones etc.  So please just leave everyone to their own taste in Music, all Loyalist artists can only do their best, they are not out there to be put down or critisized by their own kind which from experience, does to this day still happen, so all Protestants who believe in  The Protestant Faith. "

!  UNITE AND STAND TOGETHER  !

are currently working on new  Cd.s  which will be released shortly

You can book the Band by contacting them personally on

Track 1
0:00/6:47
Thank you for contacting us. We will get back to you as soon as possible
Oops. An error occurred.
Click here to try again.
Crossmaglen
The Thornlie Boys (Simply Orange)
0:00/3:34